Striking faster and harder – How the great fighters do it

Great fighters simply get more out of their bodies to create fantastic performance. Teaming up with some top MMA/UFC fighters, we were able to document the “tricks” of striking fast and hard (see the Journal of Strength and Conditioning Research, 2010)

Our objective of the testing was to document their motion patterns through video, together with muscle activation profiles, when striking a heavy bag. A muscle contracts from pulses from the brain sent via the nerves. These pulses create waveforms in the muscles that are detected by electrodes adhered to the skin overlaying the muscles. Special amplifiers and electronics capture the muscle activation profiles at a rate of 1000 times per second. The technique is known as Electromyography. We also wanted to precisely quantify the 3D motion of the lumbar region to examine how fighters use their core (McGill is a spine specialist and Chaimberg is a strength and Conditioning coach to many elite fighters).

Interestingly, we measured the same qualities that we find in many top athletes, from many sports. If we had to name a single variable common to these overachievers, it would be the incredible rate of muscle contraction and rate of relaxation.

First, the paradox linking muscle force and speed: when muscle contracts it creates force, but also stiffness. Force creates faster movement but the corresponding stiffness slows the change of muscle shape and joint velocity. For many the instruction to relax to obtain top speed seems counterintuitive. But this becomes instantly apparent hitting a golf ball. Try and hit hard using muscle and the ball never goes far. This is because muscle stiffness slows the motion down. The great long ball hitters relax through the swing gaining top speed but rapidly contract at ball contact to create a stiffness that is transferred to the club and ball. This is the “pulse”. Then the musculature instantly relaxed to maintain speed of follow through.

Similar principles apply for the hand strike and kick. The top fighters undergo a total body contraction and stiffness to initiate the foot motion of a kick. Then as the foot travels through the air gaining speed and covering distance, a relaxation phase occurs. This is followed by a second total body pulse just before impact to deliver maximum force into the opponent. This is akin to setting the entire body as an unyielding stone – thus hitting the opponent with the entire mass of the fighter. Failure to “double pulse” results in a slow kick or a soft impact, or both. Consider the activation of the back musculature demonstrated by Pavel – the great kettlebell coach and martial artist who has visited our lab. As a side note, Pavel has the strongest pound for pound “core” we have ever measured – his training works.

How can this be trained?

Older Russian science suggests that this ability can be enhanced with training. Neither shadow boxing or wailing into the heavy bag trains this muscle sequence. Shadow boxing doesn’t facilitate the second pulse at impact. Maximum effort into a heavy bag rarely trains more speed. Many coaches will clap their hands twice to imprint the double pulse into the muscle memory during fast strike training. The first clap cues the initiation of motion while the second enhances stiffness upon impact.

Bruce Lee claimed that he was able to enhance impact force by mentally focusing on withdrawing the hand or foot as quickly as possible once impact had occurred. Was this to facilitate the pulse at impact, or was it to return to “ready” position faster. The answer is probably both. He also performed a pulse at the top of the kettlebell swing, known as Kime. This teaches faster rate of contraction and relaxation. Give it a try focusing on sharpening the pulse during your KB swings.

For more exercises and training information read “Ultimate back fitness and performance” (www.backfitpro.com).

TARGET. A SECOND PULSE IS TIMED TO STIFFEN THE BODY AT IMPACT TO INCREASE THE EFFECTIVE MASS – HITTING THE OPPONENT WITH HIS ENTIRE MASS.

FIG 2: PAVEL DEMONSTRATES THE TECHNIQUE RESULTING IN VISCIOUS STRIKE POWER. THE BACK MUSCLES SHOWN HERE FIRST ACTIVATE TO STIFFEN THE BODY TO INITIATE THE LEG MOTION ALTHOUGH NO REAL MOTION HAS YET OCCURRED. THEN THE MUSCLES RELAX SOMEWHAT AS THE FOOT LEAVES THE GROUND AND GAINS SPEED TOWARDS THE TARGET. A SECOND PULSE IS TIMED TO STIFFEN THE BODY AT IMPACT TO INCREASE THE EFFECTIVE MASS – HITTING THE OPPONENT WITH HIS ENTIRE MASS. 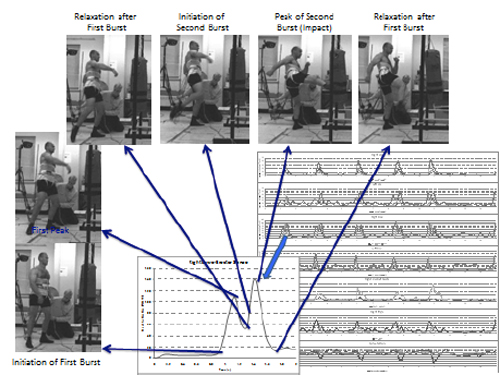 Download article in a pdf Striking faster and harder – How the great fighters do it (PDF, 209Kb).